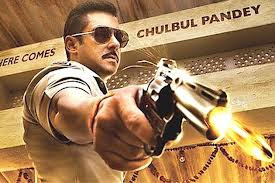 Arbaaz Khan owns a brand called Dabbang and its brand ambassador is none other than the crowd entertainer - Salman Khan. It seems that whenever Arbaaz Khan will be in need of money, he will release a Dabbang :-D.  The impact that Salman Khan makes on the masses could be seen by the whistles and cheers every time he made a gigantic entry. Some of his acts and stunts remind me of Rajnikant.  I had decided not to watch the movie in a multiplex to experience the craze for Salman but I did not miss a percent of the thrill, the aura even in the multiplex.

Arbaaz Khan annoys you by inserting songs at equal intervals. Though you will like the songs but will somebody please concentrate on the plot? Oh! There is no plot. The movie runs for 2 hours by the grace of Salman Khan, Mind-blowing Action sequences and Kareena-Mallaika yukt item numbers (more whistles and cheers and comments!)
Sonakshi Sinha sulks (read ‘sulks’, it’s not a spelling mistake) in the entire movie. Prakash Raj plays Bachcha bhai, a legislator in Kanpur who is into bad activities. Chulbul Pandey (Kunfu Pandey, Robinhood Pandey) is posted in Kanpur in Dabbang 2.  Chulbul Pandey’s job is to scrap Bachcha bhai. Prajapati Pandey (Vinod Khanna) is a considerate father this time around as far as Chulbul is concerned.  Arbaaz Khan has a similar, smaller and a dumber role.

The movie is must-must watch for Salman Khan fans. Watch it for Salman’s amazing persona on the big screen and the energy in the cinema hall. Hopefully Chulbul Pandey comes to Mumbai in Dabbang 3 (If at all Arbaaz Khan feels the need for money, there will of course be a Dabbang 3 :-D) .

Liked it or not? I would like to hear your views. Please comment with your name and location.. :-)

Popular posts from this blog

Work From Home and The Boss

May 09, 2020
It would not be wrong to say that Work from home is the new buzzword in the town. Most of us in the IT sector are doing this and yes, it's quite comfortable. Especially for people who travel hours and hours in crowded public transport systems smelling fish and co-passengers' armpits. No, It's not hyperbole - its a fact. Ok! At least in Mumbai, IT IS A FACT. The local train travel in summer becomes pathetic. The workplace is all heavenly but the travel is hell. By the time you reach office, the shirt tucked in is out in the open. The nicely ironed trousers look no more like they used to, two hours ago. Nicely polished black leather shoes are full of dust. You look at them pathetically and rub behind your trousers. Messed up and not ready to work is the mental state when you swipe into the office. And all this trouble just to reach a place which you don't like. Haha! That's life buddy. But the same life fills your pockets on the last day of every month. Work from home…
3 comments
Read more

December 12, 2015
On a beautiful Saturday morning, it was time to board that flight to Delhi which would mark the start of a nine day full of a breath-taking experience. For me, there were many things on this trip that would be my debut; travelling through the clouds*, walking on the ice clad mountains,  trekking to heights as huge as 15000 feet,  seeing my own breath coming out as vapours in those cold nights and walking close to a 100 km in a 5 day span.
* travelling through the clouds is an over-excited first timer’s representation of boarding a plane.
Day 1: Potholes In The Air !On the 18thof July, 2015, at the Chatrapati Shivaji International Airport’s Domestic terminal in Mumbai, the most happy and excited soul was probably mine. I was enjoying it all; collecting the boarding pass, security checks, and specially the boarding. When the plane left the ground; I could see the jam packed roads, the bandra-worli sea link, the birds sitting in warm sunlight probably mocking us humans – “Did you just pay …
1 comment
Read more

September 11, 2017
This post might be the happiest thing in the world today because this post was in draft mode for more than an year now. But I didn’t give up on it because of the sole reason that the trip to the heart of India was a very special one and the one to remember for life.
Travelling lets you experience the unpredictable. You know everyday when you wake up that you have to catch that 9.32 train and reach office at 10.15 and start the donkey work, run the rat race – the same race everyday, which fetches you nothing.  Travelling helps you break a little free and breathe a little easy – connect with the people and the things outside the routine; see new faces; listen to new languages; understand new accents; talk to people you have never talked to; ask them for help irrespective of whether you get it or not.
February 2016 brought to me, an opportunity to visit Madhya Pradesh. The occasion was our friend’s marriage but we decided to make the most out of it and make the journey even more fabulous. …
Post a Comment
Read more